Your Freedom Matters.
Rely On Our Skilled
Attorney to Defend You. Reach Out Today

Boone County, Missouri used a fraudulent survey to claim a “right of way” for future development on Seth Reynolds’ private property. County Surveyor Matthew Thomas testified to this “survey’s” findings committing a fraud upon the court to obtain a ruling in Boone County’s favor. The court then ordered Seth Reynolds to tear or burn down his building due to finding it was in the County’s “right of way”.

Engineer Alan Barnett discovered this fraud and told the Boone County Commissioners in an effort to end this miscarriage of justice. Commissioners Dan Atwill, Janet Thompson and Fred Parry didn’t care about the fraud.

County Counselor CJ Dykhouse, using the judge’s order, was able to have Seth Reynolds imprisoned at the Boone County Jail 24/7 during the COVID 19 pandemic in an effort to coerce Reynolds into surrendering his legal rights to hold Boone County accountable for its fraud upon the court in the County’s proposed settlement agreement.

In rural Boone County, Missouri on his property in 2013, Seth Reynolds, using Amish labor, built a 40 x 60 storage building on his tract of land in Boone County, Missouri. The eastern 1/3 of the building’s floor was secured by piers built into a steep cliff that ran into the Rocky Fork Creek . This building cost Seth over $30,000.00 to build. Boone County sold Seth a building permit for $600 authorizing this construction with a warning that he may need to make application for a zoning variance. Seth was given assurances that this variance was a sure bet to be granted by Boone County for his construction project.

Boone County officials later sent Seth a letter advising him that his recent construction was in the County right of way for future development. Boone County ordered corrective action be taken by Seth despite no plans to use the right of way on his property for any future public works project. Seth’s construction was in conformity with neighboring landowners who had constructed structures several feet closer to roadway and more in what Boone County would later claim was its “right of way” for future development along Creasy Springs Road. Boone County has NO PLANS for any public works projects in what it claims is its right of way into Seth Reynold’s property on Creasy Springs. Due to the topography of the land with a nearby cliff and other landowners with structures further into the County’s claimed right of way. Any such future public works would be prohibitively expensive to the county and burdensome on neighboring rural landowners.

In 2015, Boone County filed an injunction request in the Circuit Court of Boone County seeking a court order that Mr. Reynolds destroy his building and fence that they claim encroached on the County’s right of way. The County claimed that it had not sold Seth Reynolds a building permit in its petition to the Court. In the litigation Seth Reynolds was represented by Columbia lawyer Tom Schneider and Boone County was represented by Assistant County Counselor Ron Sweet before the Honorable Judge Jodie Asel.

The crucial evidence of the case about Boone County’s alleged right of way into Seth Reynolds’ property was provided by Boone County Surveyor Matthew Thomas and his survey was used by him to assist his testimony at trial. 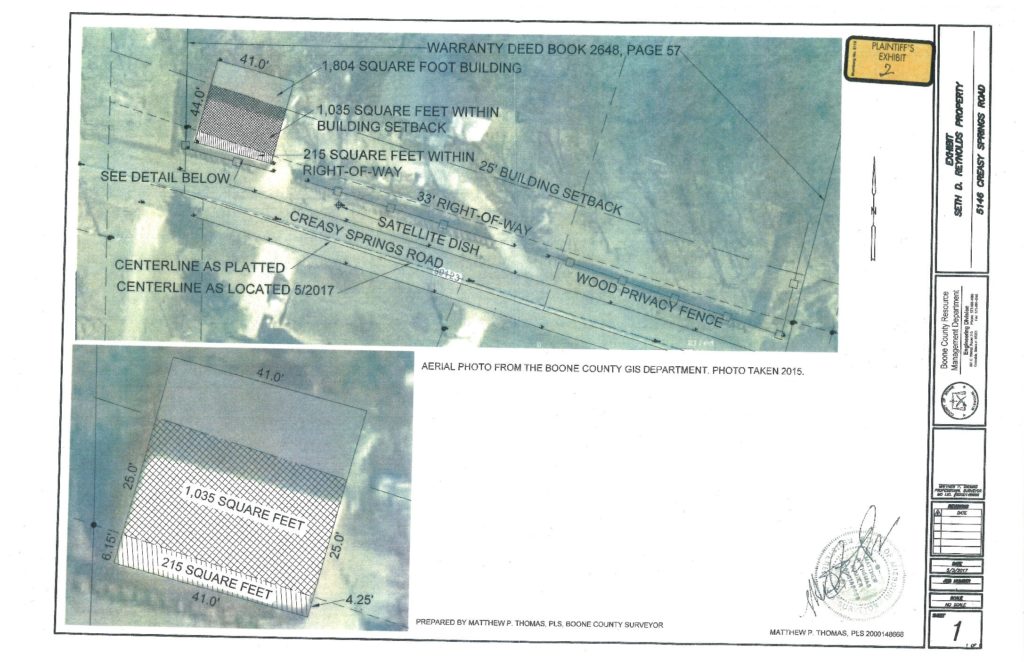 Judge Asel found that Boone County had proven that Seth Reynolds’ construction violated County Zoning ordinances and ordered that his building be destroyed. And further ordered, that if his shed was not destroyed by her deadline that Seth Reynolds would be found in contempt of her order. Thereafter he would be civilly committed to incarceration at the Boone County Jail. Initially this confinement was for ten days and then indefinitely overnights from 8:00 P.M. until 6:30 A.M. until such time as Seth brought his property into compliance with her order. Seth Reynolds expressed his financial inability to destroy this construction on his property due to its location on a cliff.

MO Licensed Public engineer Alan Barnett (Mo. lic. # 2006002786, Exp. 12/31/2020) an acquaintance of Seth’s asked to review the survey and other documents used by Boone County in obtaining this judgment. Engineer Barnett noted significant discrepancies in the survey that raised questions as to the legitimacy of Thomas’s testimony and the exhibit submitted to the court by Boone County Surveyor Matthew Thomas.

Engineer Barnett attempted to recreate the survey allegedly conducted on Seth Reynolds property but could find none of the required by law landmarks necessary for a legal survey. Thereafter, Engineer Barnett requested a copy of Surveyor Thomas’s required survey notes and Boone County refused to provide any and claimed that no such notes were made by Thomas. Engineer Barnett determined that Seth Reynolds’ construction did not in fact encroach into Boone County’s right of way and so informed Boone County on multiple occasions of his conclusions and the methodology he had used to arrive at this finding. 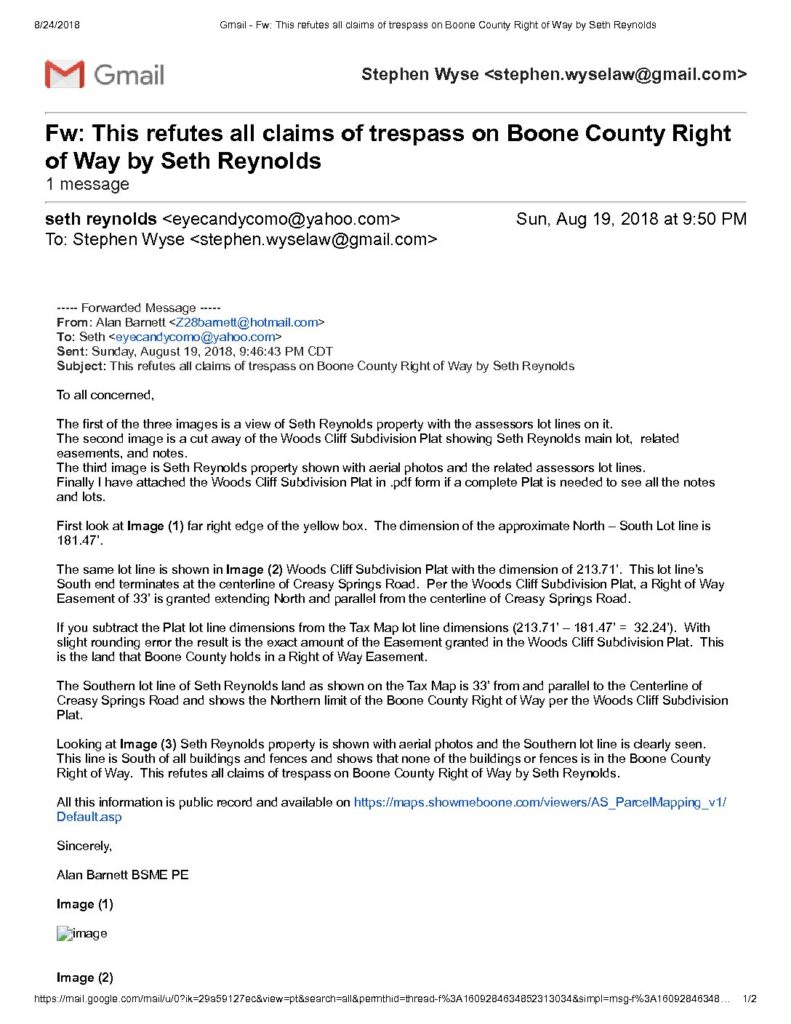 Boone County Counselor CJ Dykhouse was notified about the fraudulent survey submitted to the court to obtain the Boone County’s judgment against Seth Reynolds. Counselor Dykhouse thereafter called Thomas’s survey a “drawing” and claimed that Reynolds’ trial counsel Tom Schneider’s failure to object to the admission of the survey relieved Boone County of any responsibility to submit non-fraudulent documents to the court in Seth’s case. Multiple presentations were made to the Boone County Commission, and all three Commissioners Dan Atwill, Janet Thompson and Fred Parry, about the fraud perpetrated by Boone County against Seth Reynolds. These testimonies resulted in the Commission demanding that Seth sign away any legal right to hold them accountable before he could be released under a settlement agreement from his continuing incarceration and pay them a monthly licensing fee for his alleged encroachment into Boone County’s right of way until the building was destroyed.

The COVID 19 Pandemic has been documented to be a greater risk to those incarcerated. This risk is due their inability to observe social distancing and the layout of jails. Seth Reynolds requested that his overnight incarcerations at the Boone County Jail be stayed and he be allowed to serve his overnights as home detention during the duration of the crisis. Boone County Counselor CJ Dykhouse noting that Seth Reynolds’ business was not deemed essential in Boone County’s recently enacted stay at home order. Dykhouse requested that Seth Reynolds be held 24/7 during the indefinite pendency of the stay at home orders. Mr. Dykhouse ignored the provisions of the order that permitted non-essential business to carry out specified operations in his request for Seth Reynolds’ indefinite incarceration. Judge Asel on March 27, 2020, entered her order granting Boone County’s request and finding their unsupported allegations proven and denied subsequent requests for hearing where evidence and testimony could have been presented